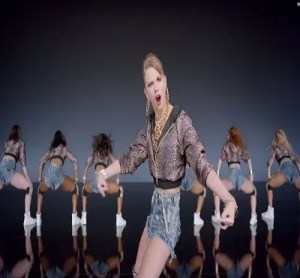 The bigger the pop star, the bigger the target for lawsuits. Taylor Swift is no stranger to legal issues (see: “Tunesday Tuesday- T-Swizzle Takes a Big Bite of Out of Apple“) and these past few days a new lawsuit against T-Swizzle is making headlines. LA-based minister and rapper/singer/songwriter (??) Jessie Braham is suing Swift to the tune of $42 million for copyright infringement. He is claiming that Swift’s immensely popular song from 2014, “Shake it Off” (one of the few videos that have surpassed 1 billion YouTube views) is guilty of stealing lyrics from Braham’s 2013 song, “Haters Gone Hate.” Braham is arguing “Shake it Off”‘s line, “Cause the haters gonna hate, hate, hate, hate, hate / and the players gonna play, play, play, play, play” is infringing upon his own song’s chorus, “Haters gone hate, playas gone play / watch out for them fakers, they’ll fake you everyday.” In order for Braham to be successful in his lawsuit, he’ll need to prove that the songs have more in common than a few common phrases.”Her hook is the same hook as mine,” he told the Daily News. “If I didn’t write the song ‘Haters Gone Hate,’ there wouldn’t be a song called ‘Shake It Off.'” Many speculate that the suit is a publicity stunt, but either way, as the two singers would agree: haters gonna hate.

Check out Braham’s “Haters Gone Hate” and then compare it to Swift’s version to see for yourself:

What do you think? $42 million worth of similarity?

And check out this article on the suit from Daily News.