The laws surrounding copyright and songwriting issues are always weighing on artists’ minds. The last thing any musician wants to do is pay over royalties for a lyric or chord progression that may or may not sound like someone else’s work. Queens Of The Stone Age’s Josh Homme is pretty pissed about it, choosing to blame “douchebag” Robin Thicke for the increased copyright sensitivity in a drunken interview with Rolling Stone. 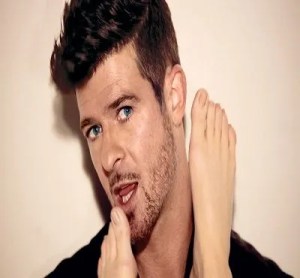 This prompted a change in the music industry where creative freedom is now overshadowed by fear and worry that a lawsuit could soon follow for any stylistic resemblences between songs. Queens Of The Stone Age frontman Josh Homme decided to give his two cents on the state of music copyright while drinking some high-end tequila during his Rolling Stone’s interview.

“It used to be, if anything had any hint of anybody else,” Homme tells Rolling Stone, “I wouldn’t play it. Now, I don’t worry about things, even though copyright law is really fucked up right now because of that dumb shit Robin Thicke. What a douchebag. Talk about thick. Now the copyright law is like, ‘If it tastes like chicken, I guess you stole it.’ Thanks, asshole.”