Pharrell Williams and Robin Thicke’s fight against Motown legend Marvin Gaye’s children continued Friday as the pop stars urged a Ninth Circuit panel to reverse a jury’s finding that they copied Gaye’s “Got to Give It Up” for their R&B hit “Blurred Lines.”

Jurors agreed Thicke and Williams, who both took the stand during the closely watched trial, had lifted elements of the 1977 Motown hit for their single.

While the Gayes heralded the victory, the ruling shook music industry insiders who warned that the verdict could stifle artistic expression.

Before the Ninth Circuit hearing on Friday, musicians and bands – including film composer Hans Zimmer and members of Linkin Park and Poison, lined up to defend Williams and Thicke and said that the ruling set a precedent that would punish artists for creating works inspired by others.

To the Gaye family’s chagrin, Kronstadt ruled before the trial that jurors could only rely on the “Got to Give It Up” sheet music deposited for copyright registration rather than Gaye’s original sound recording.

At the lengthy morning hearing at the Richard H. Chambers Courthouse, Williams and Thicke’s attorney Kathleen Sullivan told the court that “Blurred Lines” and the sheet music were not “substantially similar” under copyright law, but that the court allowed “back door” evidence from Gaye’s recording to come in through expert testimony. Kronstadt should have granted summary judgment to the music stars before the case ever went to trial, she said. 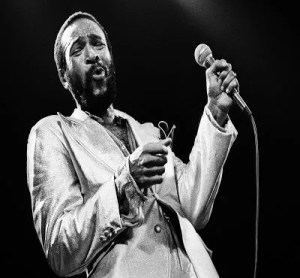 The case was not about the “groove and feel of ‘Got to Give It Up’” and it “was not about inspiration by the great artistry of Marvin Gaye,” Sullivan told the three-judge panel.

“It was about one simple question: substantial similarity between the melody, lyrics, harmony, chords and instrumentation in the deposit copy and ‘Blurred Lines,’” Sullivan said.

Sullivan said the court failed to properly instruct the jurors on the three protectable elements in the lead sheet and “Got to Give It Up,” including signature phrases and lines, hooks, and four-bar bass lines to prove substantial similarity.

“No properly instructed jury could have found those three protectable elements substantially similar,” Sullivan said. “This case just comes down to one very simple point, was it in the deposit copy or was it not?”

The case was based on a “flawed premise” that the Gayes had to show sheet music to prove copyright infringement when the court should have allowed the family to play their father’s song, instead of the “lobotomized” version recorded by session musicians, Blatt said.

If the appeals court decides to order a new trial rather than affirm, jurors should be allowed to hear Gaye’s sound recording, the family has said in court papers.

Circuit Judges Mary Murguia and Jacqueline Nguyen joined Smith on the panel, which took the case under advisement. The court did not indicate when it will rule.

– Except from article written by Matt Reynolds from Courthouse News. See the full article here.