When Jay-Z canceled a concert in Fresno, California early last week without explanation, a search for the cause quickly settled on what appeared to be an obvious one: the mogul’s 4:44 tour may not be as successful as one might expect for the hip hop legend.

Evidence was there: for several upcoming shows, resale tickets are selling far below face value, with numerous tickets still available from Ticketmaster at the primary point of sale. Given that the original sale of tickets was restrictive – one got first bite of the apple by being a member of Mr. Carter’s Tidal streaming service – and the release was his 14th studio offering – it’s not outlandish to speculate that the game may have left Mr. Carter behind, at least to an extent that affects stadium tours.

Beyoncé’s husband – or at least his legal team – appears to disagree. 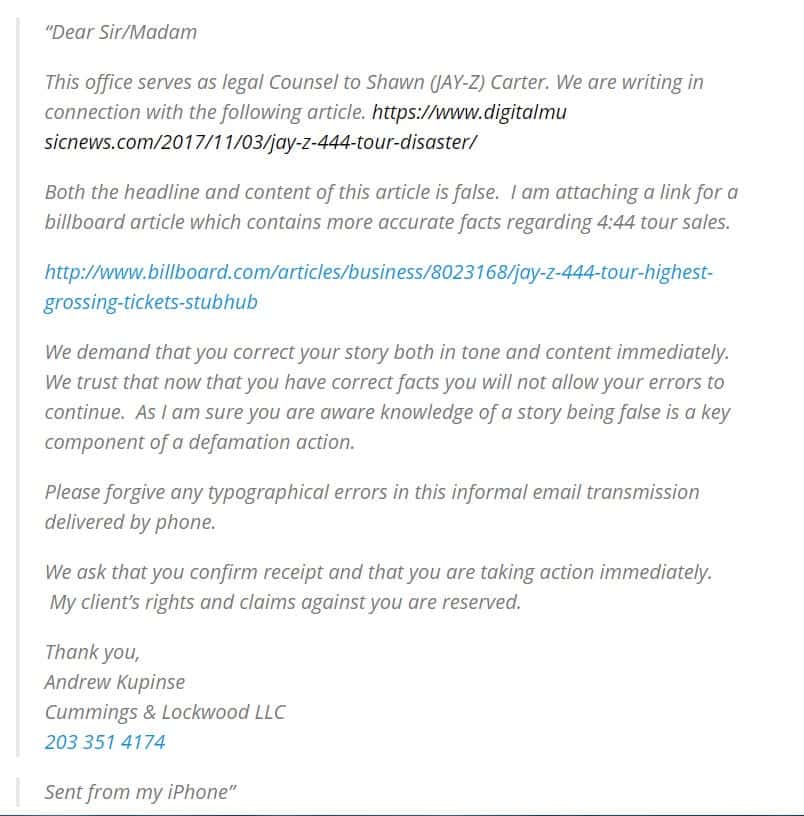 The letter points to this story from Billboard, littered with quotes from Live Nation, with whom Jay-Z signed an exclusive 10 year, $150 million deal back in 2008. Their version reads that the tour is wildly successful and low resale prices are just proof of that; they were the plan all along to price out “scalpers”. No mention was made of the Fresno cancellation or the fairly indisputable fact that – regardless of price strategy, a large number of tickets are still unsold.

Mr. Carter and team’s demand for DMN to take down the ‘disaster’ post is, they argue, that it constitutes defamation:

We demand that you correct your story both in tone and content immediately.  We trust that now that you have correct facts you will not allow your errors to continue.  As I am sure you are aware knowledge of a story being false is a key component of a defamation action.

The post’s author, Paul Reskinoff, says he responded by asking Carter’s attorney, Andrew Kupinse, “to please inform [Digital Music News] which sections of the article he believes are false”, and goes on to provide screenshots of the low priced secondary inventory and widely unpurchased primary inventory on Live Nation subsidiary Ticketmaster.