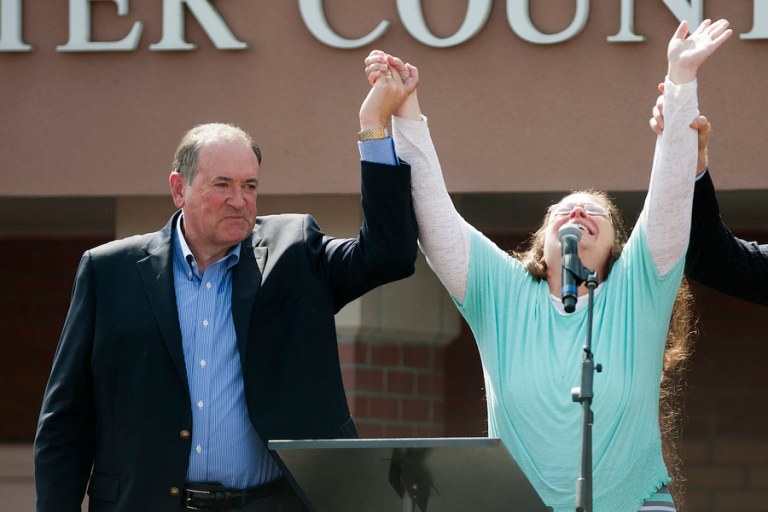 One of the biggest news stories of the past few weeks in the legal realm has taken a whole new entertainment law twist– Rowan County Clerk Kim Davis has broke the law once again by having the song “Eye of the Tiger” played at the rally celebrating her release from prison. Several weeks ago, Davis made headlines when she refused to issue a marriage license to a same sex couple on the basis of her religion (according to her). As it is the law (Supreme Court law since June of this year) that no person should be denied the right to marry based on gender and the gender of his/her spouse, Davis was held in contempt of the court and spent five days in jail. Upon her release from jail, Davis was greeted by a rally in her support, arranged by Republican presidential nominee hopeful Mike Huckabee. As a sign of solidarity, strength and support, the champion anthem from the Rocky movie series, “Eye of the Tiger” was played during the rally. Unfortunately, no one actually got legal permission from the song’s rights owner to play the song. Therefore, Davis and Huckabee are in violation of Copyright law. “Many times, a record company will look the other way in a situation like this, as it serves as free publicity for their intellectual property,” says a legal representative for the company EMI. “Though, in this case, I believe that EMI does not want their song associated with someone like Kim Davis, or Mike Huckabee for that matter, and will most likely seek full damages for this incident.” Oops.

Doesn’t this just make you want to listen to the epic song? Here’s the original music video for the song by Survivor:

And check out the full article on this here.