American XO is suing everyone behind the 2018 hit song, “Eastside.” The list includes: Benny Blanco, Halsey, Khalid, and Ed Sheeran, along with Universal Music Group, Interscope Records, and Friends Keep Secrets. The suit claims the defendants are guilty of copyright infringement over a distinctive guitar riff used in the introductions of both songs, “Loveless,” which appeared on Ameican XO’s 2016 album Pacific Coast Bloody Nose. And “Eastside.” 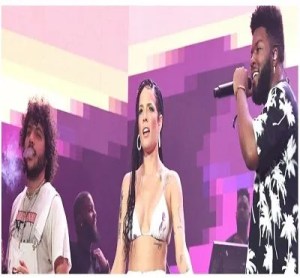 The plaintiffs argue that the “musical similarity between their song the Top-10 hit is undeniable. Both the ‘Loveless’ riff and the ‘Eastside’ riff comprise identical two-note dyads of identical note intervals played over identical beats,” the lawsuit stated. “Both riffs are played on guitar and require identical finger positions.”

“I draw inspiration from everyone. I listen to every type of music. I try to expose myself to 10, 12 new artists every day. I’m listening to everything from Beirut to Wiz to Yo Yo Ma to Arcade Fire. I try to spread it around because you never know. There could be something in one of those songs that gives me an idea to do something like this or something like that.”

– Excerpt from an article for UPROXX by Sarah Grant. Read the full article here.