Elizabeth Rowe filed a gender discrimination lawsuit against the Boston Symphony Orchestra, seeking $200,000 in back pay for the 14 years she has worked for them as the principal flutist. She has also been appealing for equal pay for 14 years. The gender wage gap between her and John Ferrillo, the orchestra’s principal oboist, is $70,000. Rowe’s claim says she should be paid equal to her principal counterpart but is not because of her gender. The case has far-reaching implications as it is the first case to test Massachusetts’ new equal-pay law, its outcome potentially affecting women across the U.S. workforce. 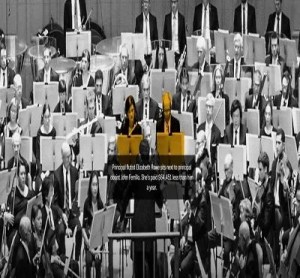 The rationale for the distinction says the Boston Symphony Orchestra is due because “the flute and oboe are not comparable because, in part, the oboe is more difficult to play and there is a larger pool of flutists.”

For Ferrillo’s part, he doesn’t agree with the orchestra’s central argument that oboists are worth more than flute players.

“Is the oboe a leading voice? Yes, it is,” he says. “Is it difficult? Yes, it is. Is the flute difficult? Ever looked at a flute part? They’ve got to play a million notes. The technical standards are astounding. Every instrument has its own private hell.”