Arstechnica reports that a video-on-demand streaming service that filters out objectionable content from Hollywood movies to make them more family friendly has run into some hot water for trying to erase Princess Leia’s bikini from Return of the Jedi for their streaming service. The aptly titled service, VidAngel buys DVDs and removes nudity, swearing, and other objectionable material and offers conservative families a clean and guilt-free watching experience. But is it legal? How do the actions of VidAngel apply to copyright law? 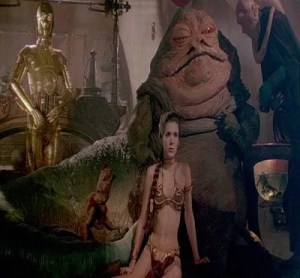 As it turns out, a court has ruled that it is illegal to remove Slave Leia’s golden bikini from the third Star Wars movie. VidAngel has breached the performance rights of Disney, Lucasfilm, 20th Century Fox, and Warner Bros., the court ordered. Apparently “Star Wars is still Star Wars, even without Princess Leia’s bikini scene.” VidAngel was attempting to float underneath fair use analysis, but their argument proved to be unsuccessful. VidAngel also tried to argue that their changes were protected under the Family Movie Act, or FMA of 2005, which allows the cracking of encryption to remove objectionable material as long as no fixed copy of the new altered version is created. The court did not agree with the FMA argument because VidAngel never had the permission to stream Return of the Jedi in the first place.

VidAngel was shut down in December of 2016 and will remain shut down after Thursday’s court ruling. The court decided that if it were to let the streaming service continue, it would start a copyright loophole that would allow anyone to legally purchase a physical copy of a movie and alter it, which would in turn contribute to piracy and “erode” the commercial value of the public performance right in the digital context. The court argued that removing objectionable material “may permit a viewer to enjoy a film,” but it does not add anything new or change the expression of the movie, meaning that the movie is still the movie, no matter what you take out.