Warner Bros are being sued for their horror movie franchise The Conjuring because Gerald Brittle says the movie infringes on his 1980 book The Demonologist, which tells the stories of Ed and Lorraine Warren. 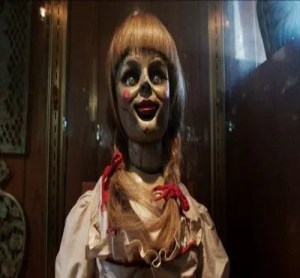 Brittle and other skeptics believe that the Warrens’ case files about paranormal and supernatural activity are faked but as Warner Bros previously said that The Conjuring and Brittle’s book are completely different things as the movies are based on ‘historical facts’, they may now need to prove that ghosts really do exist.

In the ‘massive 355-page amended complaint filed in Virginia federal court, Gerald Brittle says that he is the only one who has all the rights to “create derivative works based on the Warrens’ cases”, and, therefore, Lorraine Warren had no legal right to grant Warner Bros. permission to use any case files for The Conjuring movies.

Attorney Patrick C. Henry II writes that “Lorraine and Ed Warrens claims of what happened in their Perron Farmhouse Case File, which the Defendants freely and publicly admit their The Conjuring movie was based on, does not at all jive with the real historical facts”.

‘This is a pattern of deceit that is part of a scheme that the Warrens have perpetuated for years … There are no historical facts of a witch ever existing at the Perron farmhouse, a witch hanging herself, possession, Satanic worship or child sacrifice,’.

Attorney Benjamin Rottenborn opening his speech with a direct attack on Brittle and his claims saying that “Among other infirmities, Brittle’s latest claims fail as a matter of copyright law, are time barred, preempted by the Copyright Act, and contradicted by Brittle’s judicially noticeable admissions.”

Usually the lawsuits that involves films or books based on a history have a hard time in proving the work is protectable under copyright while the underlying historical facts aren’t — but here, Brittle argues that it isn’t the case because he later learned the Warrens were lying about their experiences.

Warner Bros doesn’t directly address the theory, instead arguing that “The Book purports to be a true account of events in the Warrens’ lives and was marketed as such for decades” and “no one has a monopoly to tell stories or make movies about true-life figures and events.”