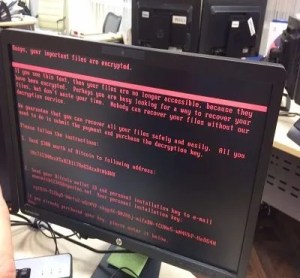 Companies all over the world are having troubles recovering after a powerful cyberattack that happened just a day ago. The virus was linked to the malware called Petrwrap or Petya, and it used an “exploit” developed by the U.S. National Security Agency.
It is the second massive attack in the past two months that used U.S. exploits against the governments and businesses.

What you need to know.

What does it do?
It infects computers and blocks their hard drives. It asks for $300 to be paid in anonymous digital currency Bitcoin in order to unlock the computer.

How does it spread?
The virus infects networks by moving from computer to computer.
It uses weakness in Microsoft Windows, an ”exploit” developed by the National Security Agency. Microsoft released a fix for this in March, but not all companies have up-to-date software.

Who’s been hit?
Top international businesses in Europe and the U.S:

Where did it start?
Researchers are still investigating it. But Cisco says that one way the virus got into computers was through software in Ukraine (a country that was hit really hard by the attacks)

Who’s behind it?
Last month’s WannaCry attack is linked to a group in North Korea, but it’s too early to say if these two attacks are connected.

Can I be attacked too?
Regular users who have up-to-date Windows computers are safe, experts say. But, if there is a computer with outdated Windows in your network, your computer can be affected too.